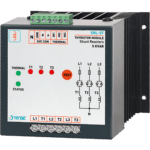 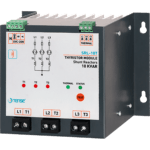 WHAT IS INDUCTIVE LOAD DRIVER (TCR)

An inductive load driver is used for balancing the capacitive power on the system. It provides a solution to cases including instant changes, phase imbalances and when the existing units are insufficient.

These devices analyse the power in the system with their measurement functions and monitor the capacitive load amount. Based on the obtained data, they balance the loads. To do that, they activate the shunt reactor when needed and balance with the inductive load.

It is the amount of energy where inductor, which is coil, can store in magnetic field when it’s working. Circuits which has coils in them are called inductive. When alternate current enters the circuit, if the voltage is ahead of current we can say inductivity exists.

What is Inductive Load?

It is the electrical load that occurs when inductive circuits work. Increase in inductive load may cause phase shift and lead to withdrawal of high levels of inductive power from electrical grids. This situation can make you have to deal with inductive punishment.

Tense Electronics inductive load drivers are designed to have a total of 3 monophase shunt reactors with 1 reactor per phase. Since each reactor is connected to a different phase, full control is achieved with the triggering required by each phase. The drivers can be used without heating or noise problems.